Architectural Resources at the Tennessee State Library and Archives 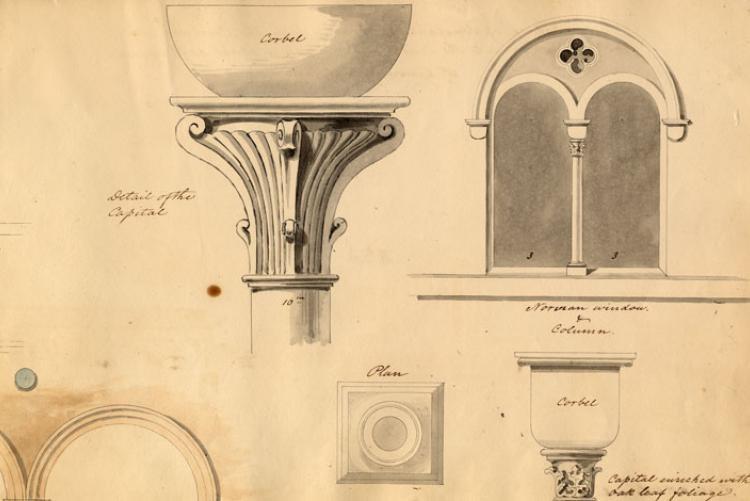 Architectural details of the Capital

Architectural details of the Capital from the William Strickland Sketchbook, 1838

The Tennessee State Library and Archives holds a diverse collection of architectural resources, including items of interest to both the professional and the layperson. The papers of several firms and state construction records comprise the bulk of the Library and Archives' blueprints collection. Researchers will find the Library & Archives’ rich trove of photographic materials to be of particular interest when learning how city skylines and architectural styles have evolved over Tennessee’s two hundred years of history.

While the following items and collections highlight the Library and Archives' holdings on the state’s built environment, patrons are advised to consult librarians and archivists when pursuing specific research questions.

The architectural drawings of Christian Albert Asmus, a prominent Nashville architect, are held by the Library and Archives. The Marr and Holman Collection, 1911-1929, features blueprints, miscellaneous papers, and photographs from that firm. American Institute of Architects Tennessee Society Records, 1919-1962 (Mf. 1363), includes some 4,000 items consisting of minutes, letters, clippings, and other materials related to the profession in Tennessee. The A.W. Hutchison, Jr. Papers, 1709-1986, consists mainly of items stemming from that individual’s research on Bryant Fleming, architect of Nashville’s Cheekwood Mansion. Educational facility blueprints can be found in the Department of Education Commissioner’s Files, 1913-1970 (RG 92), including plans for the state’s schools for the deaf and blind. RG 91 holds schoolhouse photographs from the period 1921-1938. (Some of these are available online; see Digital Collections below.)

The Ralph G. Morrissey Photographic Collection, c. 1883-1956 (Mf. 1453 and Mf. 1513), contains images of various photographic media, including prints, negatives, and slides. Among the images are those originally featured in Morrissey’s photo quizzes on Nashville history and architecture from his tenure at the Nashville Tennessean and the Nashville Tennessean Magazine. Also rich in photographic images and illustrations, the Garden Study Club of Nashville Collection (Ac. No. 95-062) contains all the materials used in the production of the organization’s 1936 book, History of Homes and Gardens of Tennessee (also available at the library). Robert Erskine Bell, a church news editor for the Nashville Banner, captured hundreds of photographs of ecclesiastical structures; they are available in the Robert Erskine Bell Church Photograph Collection, 1950-1970 (Ac. no. 85-12). The Tennessee Historical Commission’s County Architectural Surveys (RG 189) presents brief reports and often provides photographs of historic buildings in selected counties.

Charles Warterfield, Tennessee State Capitol Building Restoration Photographs, 1954-1959, traces the improvements made to the structure after its first century. Upgrades to the Library and Archives building can be studied via RG 99, Tennessee State Library and Archives Building Renovation Blueprints. Tennessee Supreme Court Building Construction Records, 1935-1942 (RG 24), includes blueprints, specifications, and other details about the building of that edifice. Approximately 1,000 items such as blueprints, bids, contracts, and photographs can be found in RG 194, State Building Commission Records, 1935-1981.

Researchers interested in the construction and upkeep of the state’s bridges will find useful RG 39, The Mississippi River Bridge at Memphis, 1939-1951; RG 207, Bridge Inspection Reports, 1972-2002; and The Nashville Bridge Company, 1819-1853 (Ac. no. 65, 207). A vast amount of information is offered in records of the Department of Highways and Public Works (RG 84), which details the construction of many state highways, bridges, and other public projects.

Although no collections have been digitized in their entirety, the Library & Archives' virtual initiative, the Tennessee Virtual Archive (TeVA), allows patrons to browse selected images. The William Strickland Sketchbook, 1838, is a collection of watercolors the architect created during a tour of Europe; Early 20th Century Schoolhouses illustrates the variety in building style and quality of Tennessee grammar schools of the period, including a few of the state’s Rosenwald schools; and the Centennial Exposition collection depicts some of the temporary structures—inspired by the nation’s City Beautiful movement—erected for the state’s anniversary of statehood celebration in 1897.

Patrons may view Tennessee Sanborn Fire Insurance Maps either on microfilm or online via the Library’s computer stations. The maps are available for the principal cities in Tennessee as well as many smaller towns. Nathan Nirenstein’s National Occupancy Maps offer detailed views of the business districts of Chattanooga, Knoxville, Memphis, and Nashville in the mid-20th century; the maps list virtually every shop and firm operating in downtown areas, as well as the owner of each building. Scores of other historical maps are available from the Manuscripts Department, while a variety of atlases may be found in the library. Many maps from the Library & Archives' manuscript collections are available online via the Tennessee Virtual Archive.

The Library and Archives holds records of the Historic American Buildings Survey (RG 89) for many of the 95 counties in Tennessee. Capitol Construction Records, Board of Building Commissioners of the State Capitol, 1844-1865 (RG 7), grants access to unique information including correspondence, contracts, bids, and wage records for the multitude of workers engaged in the statehouse project. RG 14, State Capitol Repair Records, 1866-1953, and RG 121, Tennessee State Capitol Repair Records, 1953-1988, chronicle the maintenance and restoration of that building over a century and a half. Real Estate Books, 1866-1870, documents the flurry of exchange of real estate in the early Reconstruction period; Davidson and several other Tennessee counties are included (Mf. 144). Additionally, many record groups and manuscript materials have been microfilmed to facilitate research and conserve primary documents.